[kkstarratings]This is Dan from Vagabond Buddha. This is my Bratislava Weekend Getaway guide.

We are digital nomads traveling the world finding the best retire cheap in paradise locations in the world.

We have been in Mexico for 4 months. Now, we are on our way to Portugal for a month or two. We think Portugal might be a place that many digital nomads and international retirees would like to spend time. So we are heading to Portugal to gather data for you.

On our way to Portugal, we are visiting friends in Budapest. Bratislava and Vienna are just 2.5 hours from Budapest. So we are going to spend 2-3 days in both Vienna and Bratislava.

While here in Bratislava, I am creating this travel guide for you. I am keeping it short and sweet because our time here is limited.

If you would like to learn how to make money online or live as a digital nomad all over the world, please subscribe at Vagabond Buddha or our Youtube Channel or grab a free copy of my Ebook.

Here are some interesting initial facts about Bratislava. I am here now as I type these words. 🙂 Click on the below Google Map to zoom into Bratislava. 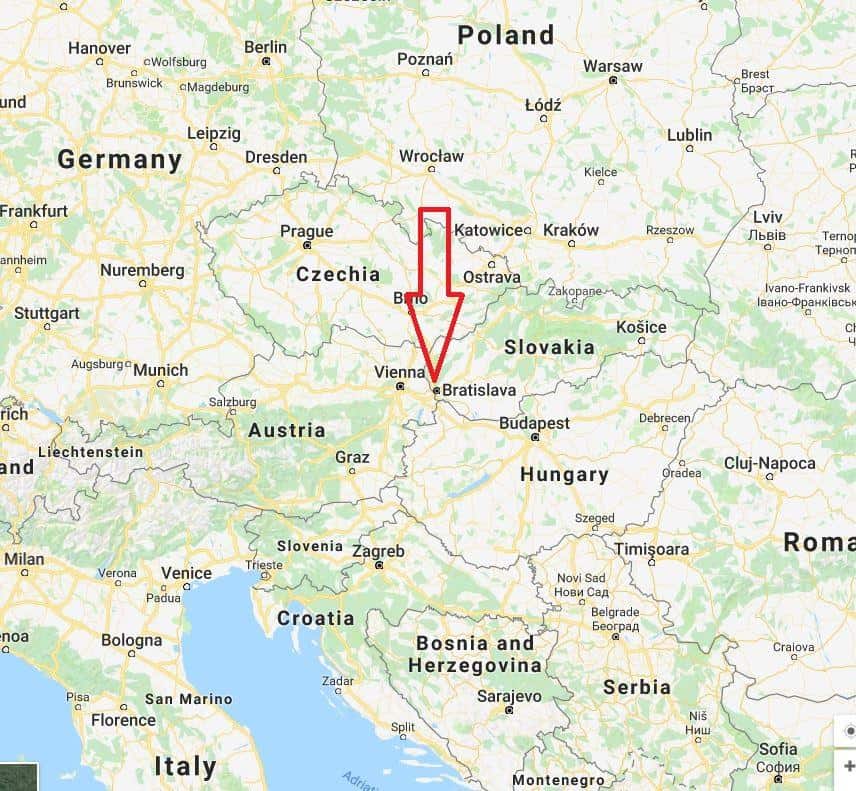 If you find this interesting or helpful, please book using my recommendations. 🙂 If you book my recommendations such as flights, tours (Viator Tours, Get Your Guide Tours) or accommodations, you will pay nothing extra, but we will earn a small commission.

Here is the Youtube video of our Bratislava Free Walking Tour.

Click the interactive Google Map on your smartphone to be guided on this tour. 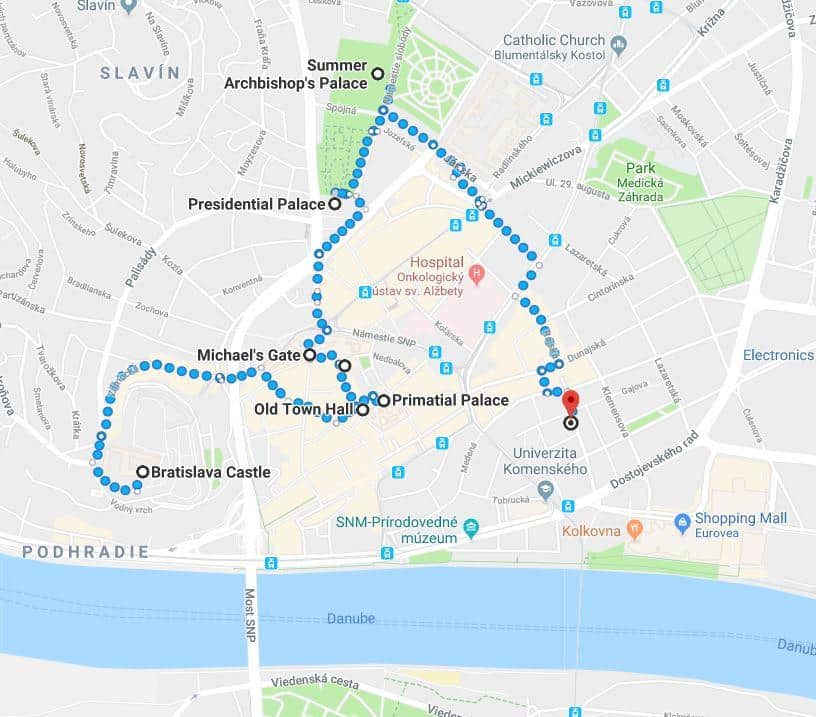 Bratislava Castle: This is the main Castle of Bratislava, the capital of Slovakia. The site of the castle, like the city, has been inhabited for thousands of years because of its strategic location and access throughout Europe. The Baden Culture was the first to construct settlements on Castle Hill in 3500 BC. Later, evidence shows castle hill served as an acropolis for the Kalenderberg Culture in 750 BC.

The castle hill was an important center for Celts and Romans in the 5th century. Slavs showed up during the 6th through 9th centuries. By the 9th century, there was a palace constructed of stone and a basilica. By the 11th century, the castle was the central castle for the Kingdom of Hungary. It was one of the few castles able to withstand Mongol attacks in 1241 and 1242. When the Turks conquered present-day Hungary, this castle became the capital of the remaining Kingdom of Hungary.

When Maria Theresa of Austria became the queen of the Kingdom of Hungary, she kept her promise to live both in this Castle and in Austria. Maria Theresa was the only female ruler of the House of Habsburg. She was a sovereign of Austria, Hungary, Croatia, Bohemia, Transylvania, and Milan, and the Holy Roman Empress from 1740 to 1780.

Old Town Hall: The Old Town of Bratislava is a complex of buildings built in the 14th century AD. The town hall was created by connecting 3 former townhouses. The Old Town Hall houses the Bratislava City Museum, founded in 1868 and includes torture devices. The townhall underwent many restorations, the most recent a Renaissance style renovation in 1599 and a Baroque restoration after an 18th-century fire.

Primatial Palace: This palace in old town Bratislava was built in 1781 for the archbishop. After the archbishop moved to the summer palace this palace was used for ceremonial government purposes, such as signing international treaties and peace accords. The Hall of Mirrors was used to sign the fourth Peace of Pressburg ending the war of the Third Coalition dissolving the Holy Roman Empire in 1805. The bust of Emperor Francis II on the staircase next to the Hall of Mirrors commemorates this event.

Franciscan Church (Church of the Annunciation): This is the oldest religious building in old town Bratislava. The church was consecrated in 1297 in the presence of King Henry II of Hungary. In 1526, Ferdinand I of the Holy Roman Empire was elected to become the King of Hungary. Kings knighted nobles here to the Order of the Golden Spur. Adjacent Chapel of Saint John was built in Gothic style in the 14th century.

Michael’s Gate: This is the only gate surviving from the medieval fortifications. Bult around 1300, it was refreshed by Baroque construction in 1758 with a Dragon and St. Micheal on top. During medieval times the city was surrounded by walls with entry and exit only possible through one of the four gates. This entrance was rebuilt to show how it was once closed off by a drawbridge and moat.

Grassalkovich Palace: Today, this serves as the palace of the president of Slovakia. It was built in 1760 for a Croatian Aristocrat, Antal Grassalkovich, a close friend of Maria Theresa.

If you would like to learn how to flourish and live all over the world in the new digital economy, possibly with much less money than you spend in your home country, please subscribe to Vagabond Buddha, our Youtube Channel, or get a free copy of my Ebook.

Summer Archbishop’s Palace: This was originally the 17th century Renaissance summer seat for the archbishops of Esztergom. The archbishops were based in Bratislava during the Ottoman Empire. The palace now houses the government of Slovakia.

Church of St. Elizabeth (Blue Church): This is an Art Noveau Church completed in 1913 named after Saint Elizabeth. Saint Elizabeth was a princess of the Kingdom of Hungary who was married at 14, widowed at 20, and died at the age of 24. She was canonized in 1235 for her Christian charity. She used her dowry to build a hospital where she served the sick daily herself.

Please book using my recommendations. 🙂 If you book my recommendations such as flights, tours (Viator Tours, Get Your Guide Tours) or accommodations, you will pay nothing extra, but we will earn a small commission.

Viator Tours: There are some really great day tours originating in Bratislava or Vienna. Here are a few that remain top rated by hundreds of people over many months.

GetYourGuideTours: There are some really great day tours originating in Bratislava or Vienna. Here are a few that remain consistently top rated over many months:

There were only two eating experiences we loved here, so we will share only those two.

Bratislava Flagship Restaurant: This is a traditional Bratislava restaurant with amazing food and great prices. It is also a great traditional experience. A meal for two here including drinks was about 17 Euros.

Asian Bistro Hoang-Nam: This is a super cheap Vietnamese place that both Qiang Hui and I loved. We kept going back. I had a Tofu-Rice dish that was 3.5 Euros. Qiang had a chicken pho dish that was 3.0 Euros.

You should stay within 4-5 blocks from the Old Town City Hall in Bratislava, if possible. Here are some recommendations depending on your budget, they get cheaper as you move down the list.

Airbnb (Where we stayed.) If you are new to Airbnb, use this code http://www.airbnb.com/c/dbell50 for a big discount.

I started living internationally in 2007. The world is changing and you might be curious about how you could live the laptop lifestyle. Maybe you will be a digital nomad someday? If you would like to learn how to flourish in the new digital economy, please subscribe to Vagabond Buddha, our Youtube Channel, or get a free copy of my Ebook.

The above table is just my notes from my time here. The above numbers are for one person and do not include alcohol, tours, or extras. I do not guarantee these prices for anyone.

For more information about how the above “Cost of Living Monthly Multiplier” works, please visit the bottom of this page at Vagabond Buddha.

Please subscribe here or on our Youtube Channel if you would like to receive the costs of living estimates for our next stop in the world.

Please book using my recommendations. 🙂 If you book my recommendations such as flights, tours (Viator Tours, Get Your Guide Tours) or accommodations, you will pay nothing extra, but we will earn a small commission.

Warning: I am not offering you these prices.  These are just my notes and estimates from the time of my visit and this post.  Your costs will likely be drastically different if significant inflation or deflation occurs or the market changes after this post.  I will not update these numbers until I am on the ground again here, if ever.