This is our Porto Portugal Old Town Walking Tour, Video, and Google Map.

Above is the video of our Porto Old Town Walking Tour. Click the interactive Google Map on your smartphone to be guided on this tour. 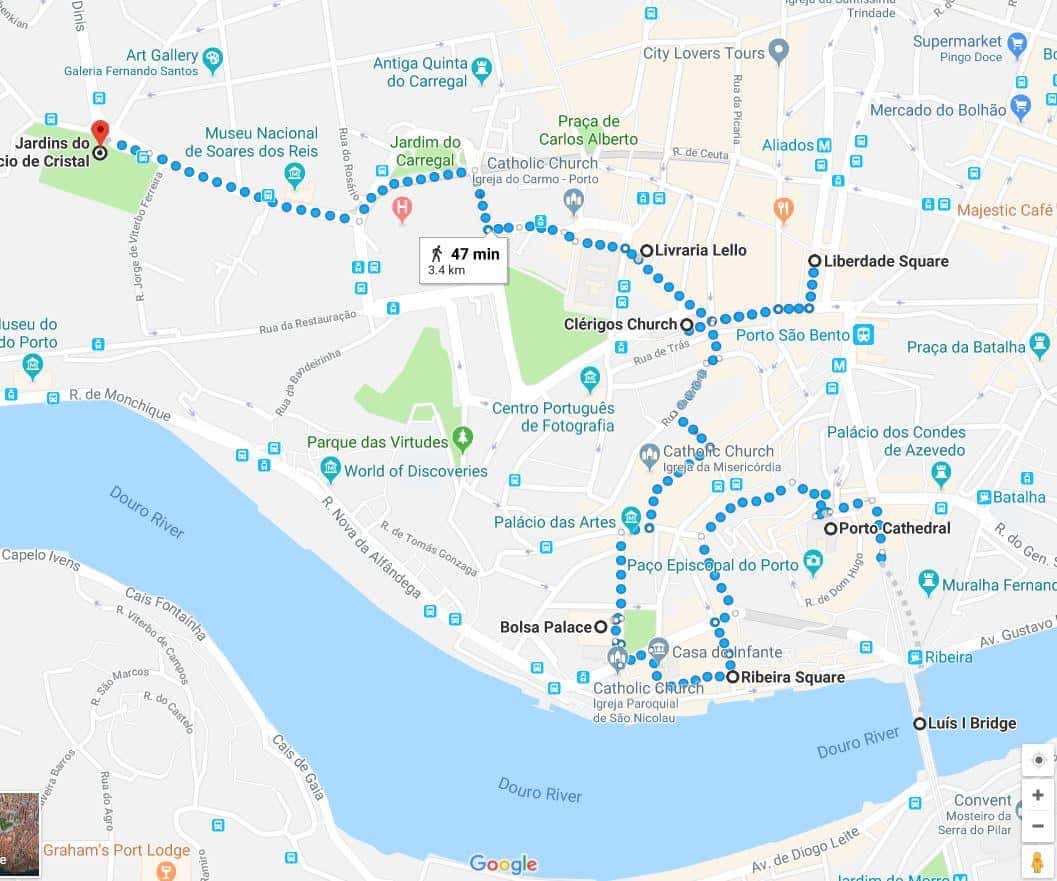 Dom Luís I Bridge: This double-deck metal arch bridge over the River Douro connects the cities of Porto and Vila Nova de Gaia in Portugal. It is 172 meters (564 ft) long. The bridge was first proposed by Gustave Eiffel of the Eiffel Tower in 1879. But it was opened for a bidding competition a year later and an organization represented by one of Eiffel’s students won the bid. It was completed in 1886.

Porto Cathedral: The Porto Cathedral is a Roman Catholic church located in the historical center of Porto. It is one of the city’s oldest monuments. Its construction began in the 12th century and was completed in the 16th century. The exterior remains mainly Romanesque but Baroque influences were later added. The cloister is done in Gothic.

Ribeira Square: This is the oldest part of the city.

Palácio da Bolsa: The Stock Exchange Palace is a historical building in Porto, Portugal. The palace was built in the 19th century by the city’s Commercial Association in a Neoclassical style. It is on Infante D. Henrique Square in the historical center of Porto and has received a UNESCO World Heritage Site designation.

Clérigos Church: The Church of the Clergymen is a Baroque church built in the 18th century. Its bell tower is one of the most characteristic symbols of Porto and can be seen from all over the city. It takes 240 steps to get to the top of the tower.

Liberdade Square: Liberty Square is an area of Urbanization that began in 1718. Cardosas Palace (Palácio das Cardosas), originally built as a convent in 1788, is the oldest building of the square. City Hall was moved to the north side of the square in 1819. A monument of King Peter IV was erected in 1866 in the middle of the square. He is riding a horse while holding the Constitution that he had fought to protect during the Liberal Wars.

Livraria Lello: This 19th-century bookstore is one of the oldest bookstores in Portugal and frequently rated among the top bookstores in the world. It has signed first edition and ancient books so not that many books are sold anymore. But it is so ornate and beautiful inside, they charge 5 Euros for entry and it is worth it. It was frequented by JK Rowling, author of the Harry Potter series when she taught English in Porto.

Jardins do Palácio de Cristal: These romantic gardens were created by the German landscaper Émile David in 1867. Here you will experience breathtaking panoramic views of the Douro River and the sea. The garden is also next door to Quinta da Macieirinha which includes the Romantic Museum and the Port Wine Manor.

Next, just wander aimlessly around the city. That is the most fun of all.

Here is one the most popular guided tours in Porto: City Train Tour, River Cruise & Wine Cellar. Here is the full list of Porto tours for this provider. If that didn’t overwhelm you, here are even more choices from another great tour provider in Porto along with their best selling tour. You can also just go to their web pages and browse for tours anywhere in the world.

Please book using our links to recommended flights, tours (GetYourGuide, Viator Tours) or accommodations. You will pay nothing extra, but we will earn a small commission. Your kindness will encourage us to keep making these travel guides and videos.