This is Dan from Vagabond Buddha. This is my things to do in Casablanca Morocco guide.

Normally I discuss whether or not I would consider retiring in a place. If I think a place would have a medium or high demand for early retirement, I provide more analysis about the cost of living there. But this feels more like a place I would just visit for a few days or a week, so I will not be discussing livability or cost of living.

Things to Do in Casablanca, Morocco 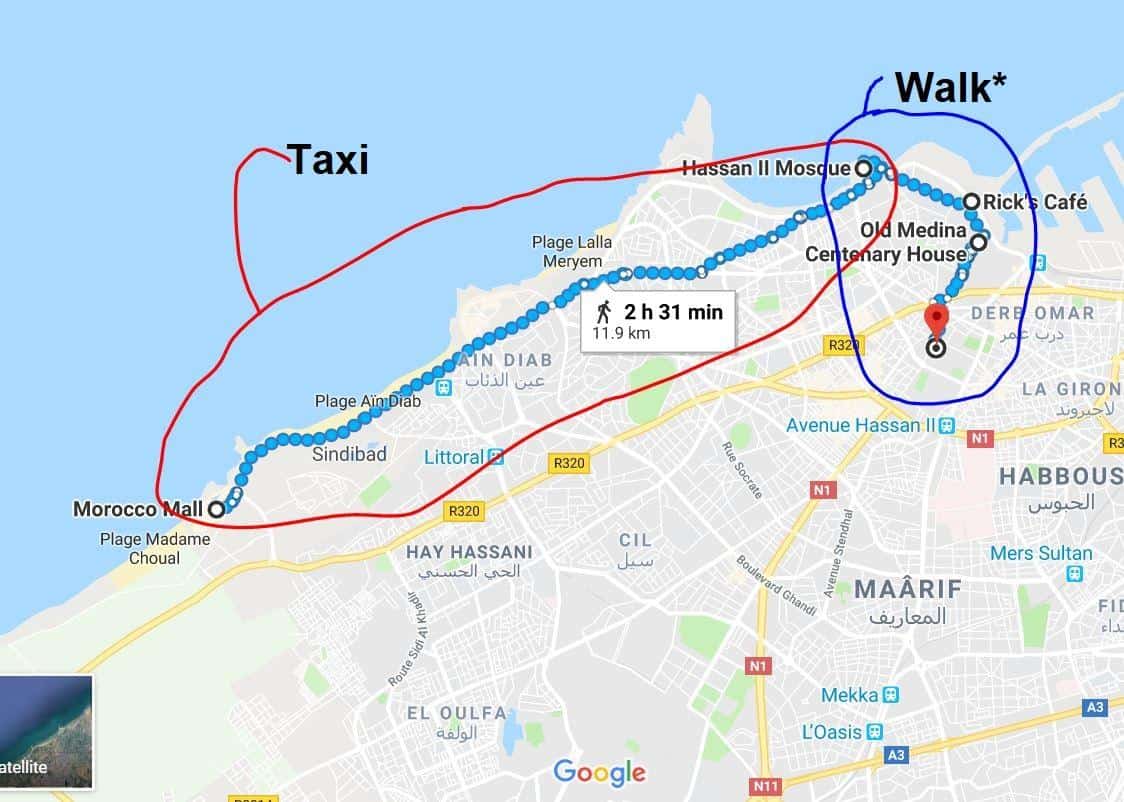 Here are the things you must see in Casablanca. Above is the video of our free Casablanca walking tour video and map. Click the interactive Google Map on your smartphone to be guided on this tour.

Walk*: This is a day time tour only. You should taxi from the first to the second stops. If this is your first experience walking through a Souk or Medina in Morocco, Egypt, India, etc., I recommend getting one of the guided tours at the links below. It was not as aggressive as Marrakech when we walked, but it is your first time so get a guide.

Morocco Mall: There is a beautiful modern mall with many of the international major brands. Make sure to see the beautiful 2-story all glass aquarium full of very large fish, right in the middle of the mall. Take a taxi from the mall to the following mosque. It is too far and not really interesting enough to walk.

Hassan II Mosque: The mosque accommodates 25,000 worshippers and will hold another 80,000 in the courtyard. It cost 800 million to build and was completed in 1993. It has the world’s tallest minaret at 210 meters, which is 690 feet. The tour is reasonably priced and even non-muslims are allowed to see inside with an approved guide.

Rick’s Cafe: The 1942 American movie classic Casablanca with Humphrey Bogart was filmed in part on a movie set called Rick’s Cafe which did not actually exist at the time of filming. Later, someone created a restaurant and bar and named it Rick’s Cafe. You can visit the restaurant while you are in Casablanca. It is a bit pricey whe compared to what you might spend in a family restaurant in Casablanca but you will get some great photographs. They also have live jazz music playing from to time. Feel free to walk by in the day, but visit at night for dinner to get the full experience.

Old Medina: The spot on the above map is not a place of interest, it is just there to get the blue dot on Google Maps to walk you through the Medina. Although the Casablanca Medina/Souk is not as frequented by tourists as the ones in Fez or Marrakech, you will what a true market has looked like for hundreds of years. The windy walkways are lined with small stores and carts full of fresh fruits and vegetables, fish and meats, and locally focused clothing and other household goods. The streets can be muddy so make sure to wear appropriate shoes (boots or old trainers).

Casablanca Cathedral: This beautiful Roman Catholic Catedral was constructed in 1930 during the French protectorate period in Casablanca. There is a fence around it and it appears as if they might be remodeling it, but you can often get in through the front gate and the guards will let you go inside for 20 DMs or $2 USD. This is the last stop on the walking tour of Casablanca.

Please book using our links to recommended flights, tours, more tours or accommodations. You will pay nothing extra, but we will earn a small commission. Your kindness in return for our shared knowledge is greatly appreciated.

Here are the two tour providers 1 and 2 we recommend in and around Casablanca.

Broadly, I recommend staying in this area of Casablanca Morocco.

Here are a few places at various price points: High, Medium, or Low.

Here is where we stayed for 3 nights. It had a kitchen where we could cook, a private room with a balcony, and a helpful friendly man as a host. You can see the inside of his place in our digital nomad’s video below. (If you are new to Airbnb, use this code http://www.airbnb.com/c/dbell50 for a big discount).

I travel around the world and leave bread crumbs so other digital nomads might be able to save some time or money if they follow me. From the Blue City in Morocco, we visited Casablanca for 3 nights and then headed to the capital of Morocco, Rabat.

We bought groceries and ate 1 or 2 meals at home each day. We tried a few restaurants also but only recommend the following:

Rick’s Cafe: This cafe is named after a cafe in the 1942 American movie classic Casablanca with Humphrey Bogart. To see the inside, check out the free Casablanca walking tour video above. The food was surprisingly good. They could have just existed on the hype of the movie, but they actually have great food, atmosphere and live music on many nights starting around 8 pm.

Veggie: Qiang Hui of Hobo Ventures found this great vegan/vegetarian burger place for us. It was only a 5-minute walk from our apartment.

Coquillage Market: This is a grocery store is where you will find beer, wine, and alcohol along with many expensive foreign foods you won’t find in other grocery stores.

Vagabond Buddha’s Kitchen: We always cook some at home because we can control the healthy ingredients. We bought our groceries in this supermarket in the basement of this mall only 3 blocks from our Airbnb. For hard to find foods we shopped at the more expensive market listed in the previous paragraph–Coquillage Market.

Here is the Google Map of Casablanca. Here are some interesting facts about Casablanca from Wikipedia.

Casablanca has a population of over 3 million people with more than double that in the surrounding metropolitan area. Casablanca is the economic and business center and Rabat is the capital of Morocco.

Berber tribes founded Casablanca in the 7th century BC.

Arabs and Berbers from what is now called Morocco (the Moors) conquered the Iberian Penninsula of Europe in the 8th century. At the height of their conquest, the Moors had invaded as far north as Tours in France in 732 AD. The Iberian Penninsula had formerly been part of the Roman Empire.

Arabs migrated to the region in the 12th century. Sunni Muslims called Merinids dominated in the region from the 13th to the 15th century and the Portuguese were back in control to eliminate pirates by the early 16th century. The Portuguese built a military fortress at that time and were joined by the Spanish, but both abandoned the area after an earthquake destroyed much of Casablanca in 1755.

Although the French colonization of this part of Morocco was not formalized until 1910, the French three years before wounding or killing 15,000 people of Casablanca.

American and British forces attacked in 1942 and Casablanca became for American aircraft during World War II.

Morocco gained its independence from France in 1955.

These are my notes and estimates from the time of my visit and this post. Your costs will likely be drastically different if significant inflation or deflation occurs or the market changes after this post. I will not update these numbers until I am on the ground again here, if ever.