[kkstarratings]This is Dan from Vagabond Buddha. This is my Blue City, Chefchaouen, Things to Do guide.

Blue City, Chefchaouen, Things to Do

Here are the things you must see in Chefchaouen. Above is the video of our Chefchaouen Old Town Walking Tour. The video and map are free. Click the interactive Google Map on your smartphone to be guided on this tour. 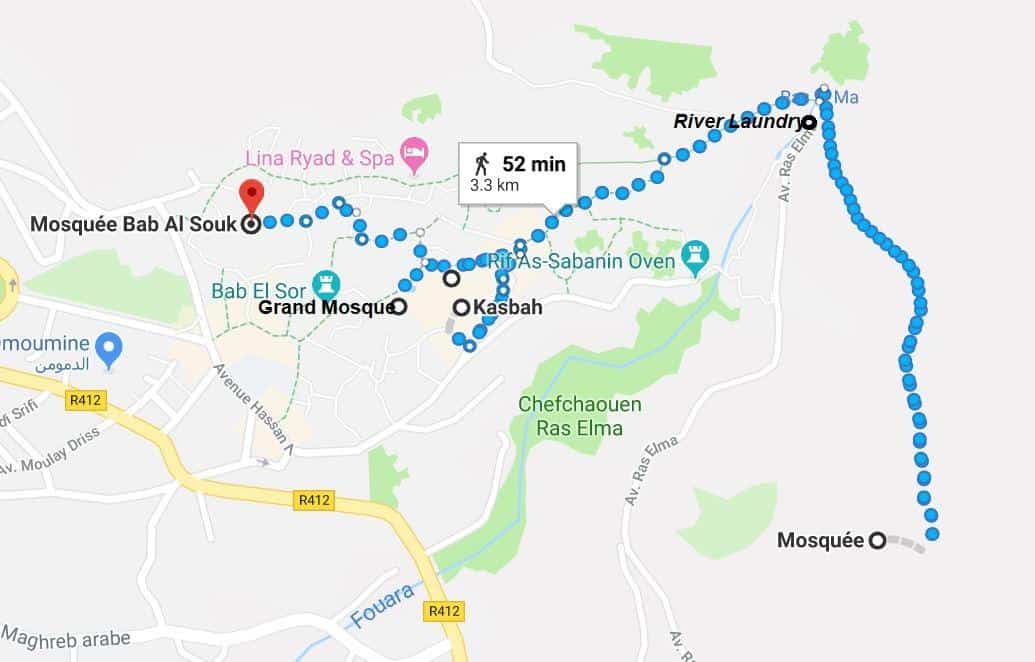 Kasbah: Chefchaouen was founded with this Kasbah in 1471 for the purpose of fighting Portuguese invasions that occurred after the Spanish Reconquista. After the Moors were pushed out of the Iberian Penninsula, the Portuguese and Spanish attacked the northern part of Morocco, many times. This Kasbah was built to defend against invasions. Over the years, the city of Chefchaouen grew around this fortification. Within the Kasbah, you will see the following museum. Also, inside the Kasbah, you can gain entry to the top of the tower. You can also go see the chains in the basement of the tower.

Kasbah Museum (Ethnographic Museum): There is a museum inside the Kasbah with history, cultural artifacts, and an art gallery.

Grande Mosque: The Mosque was built in the 15th century by Moulay Mohamed Ben Ali Ben Rachid. He was the son of the Chefchaouen’s founder, Moulay Ali Ben Moussa Ben Rached El Alami. You’ll notice that the minaret is octogonal unlike most others in Morocco. As customary, only Muslims are allowed to enter.

Mosquée Bab Al Souk: This was a mosque built by the locals about 100 years before the Grand Mosque. This is on the map not only because of its historical significance but also because the map will take you through a cool area of the Medina on your way.

River Laundry: On your way to the Spanish Mosque, you will cross over a bridge. Look down at the river and you will see some small buildings. Those buildings are the site of a public river laundry that has been in operation for over 1000 years.

Spanish Mosque: This is just a beautiful sunset view of the city. This was originally built by the Spanish as a church but was eventually converted to a mosque. The locals call it the Spanish Mosque. Yes, I know that is a contradiction in terms, but I didn’t name it. This is a great place to watch the sunset over the blue city.

Weed Everywhere: Everywhere you go in the Blue City, people will offer you marijuana. I don’t smoke weed but many of my friends do. But I never recommend breaking the law when you are out of your home country. Do you really want to see the inside of a Moroccan prison?

Please book using our links to recommended flights, tours, tours 2, or accommodations. You will pay nothing extra, but we will earn a small commission. Your kindness in return for our shared knowledge is greatly appreciated.

Here are some of the ==>favorite tours<== people take in and around Chefchaouen. 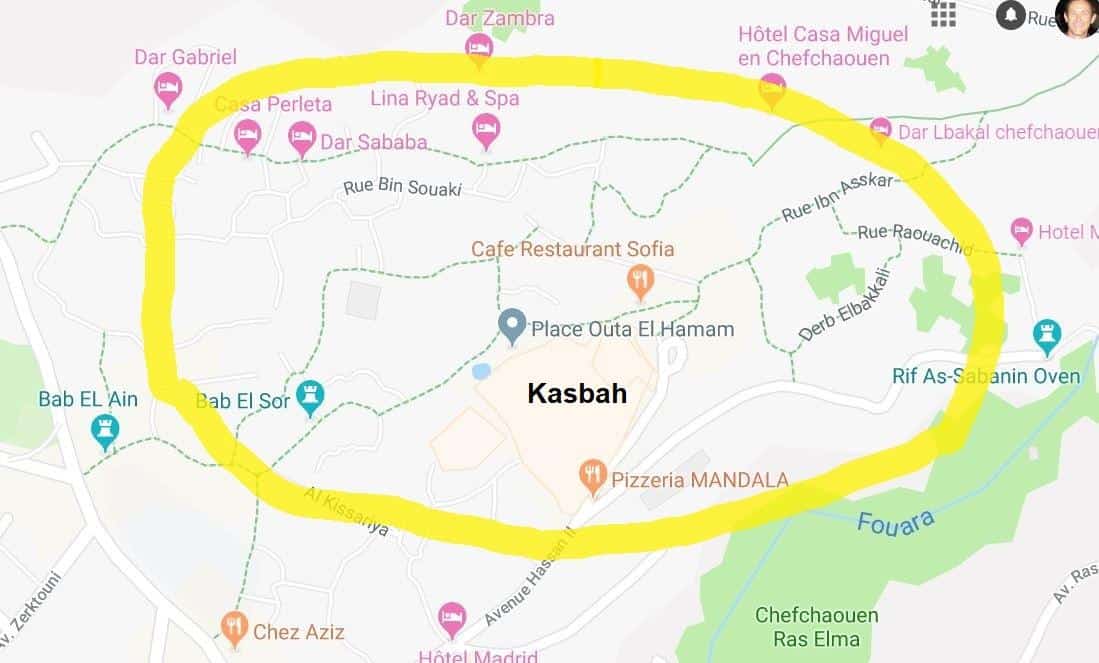 You should stay inside the Old Medina in Chefchaouen, if possible. That will give you the true experience of living in this part of the world. If you have to take a taxi to the Medina, you will be less likely to enjoy it in the evening. I have marked on the above map and provided a few great choices for you below.

I recommend the following places at each price point: High, Medium, or Low.

We stayed in this place that we booked on Airbnb. We totally loved it for the money but we don’t recommend booking it unless your phone can act as a data router. The property has internet but it is kept inside the host’s room and doesn’t work reliably in the common areas. Otherwise, it is great. Beautiful, clean, and has a kitchen you can cook in. (If you are new to Airbnb, use this code http://www.airbnb.com/c/dbell50 for a big discount).

We were in Chefchaouen for 3 nights and then headed to Casablanca. The food was pretty good and was priced well as compared to other more touristy areas of Morocco.food was overpriced in the tourist areas of Chefchaouen.

Braisara Soup (white bean soup): There is a small restaurant with only two tables. When you walk to the River Laundry it will be inside the Souk about 200 meters before you get to the river. It has no name on the outside and there is one man working inside who owns the place. There is a white sign in front that says bean soup in Arabic which you won’t be able to read so just look for the number 6. That is what he charges for his soup. The soup costs 6 Dh and his mint tea is 4 Dh. That is $ 1 USD for the best meal you will have in The Blue City. The place is near here.

Mr. Bin Restaurant: Have the egg drop soup here. One of the best Chinenese dishes I have ever tasted.

Vagabond Buddha’s Kitchen: We normally cook about 1 to 2 meals at home per day in our Airbnb kitchen. But the food was priced right in the restaurants so we ate out mostly while we were in the Blue City.

Grab a free copy of my Ebook. You will learn how to save and earn money living internationally.

Here is the Google Map of Chefchaouen. Here are some interesting facts about Chefchaouen from Wikipedia. I am in Chefchaouen now.

Because of the many shades of blue of the buildings, Chefchaouen is known as the blue city.

Arabs and Berbers from what is now called Morocco (the Moors) conquered the Iberian Penninsula of Europe in the 8th century. At the height of their conquest, the Moors had invaded as far north as Tours in France in 732 AD. The Iberian Penninsula had formerly been part of the Roman Empire.

While the Iberian peninsula of Europe (now Spain and Portugal) was reconquered by soldiers from the north in what is now called the Spanish Reconquista, many people migrated to the Chefchaouen area. There were Ghomara tribes in this region when the migrants arrived.

Later, Chefchaouen was founded as a Kasbah in 1471 for the purpose of fighting Portuguese invasions that occurred after the Spanish Reconquista. When the Moors abandoned Granada in 1494, many came here to Chefchaouen, They painted their homes white as was customary in Granada at the time.

The pale blues you see now were introduced in the 1930s mostly in the Jewish neighborhoods. The city has slowly adopted the blue as its distinguishing characteristic. It has helped attract tourists.

In 1920, the Spanish conquered this area as part of Spanish Morocco. Spain relinquished Chefchaouen after the independence of Morocco in 1956.

If you are interested in the subject of present moment awareness, my new videos on that subject are here and here.

I am not offering you any of the above prices. These are just my notes and estimates from the time of my visit and this post. Your costs will likely be drastically different if significant inflation or deflation occurs or the market changes after this post. I will not update these numbers until I am on the ground again here, if ever.