In this report, I share the best Mexican Highlands to Visit for 2021.

In yesterday’s report, I discussed a Kayak Tool that will help you determine what countries are open for travel during the coronavirus. I shared a link to John Hopkins University, that ranked Mexico seventh in the number of coronavirus trailing only the USA, Brazil, Russia, Colombia, and Peru. I then provided the following color-coded map of Mexico showing the areas of Mexico experiencing travel advisories. 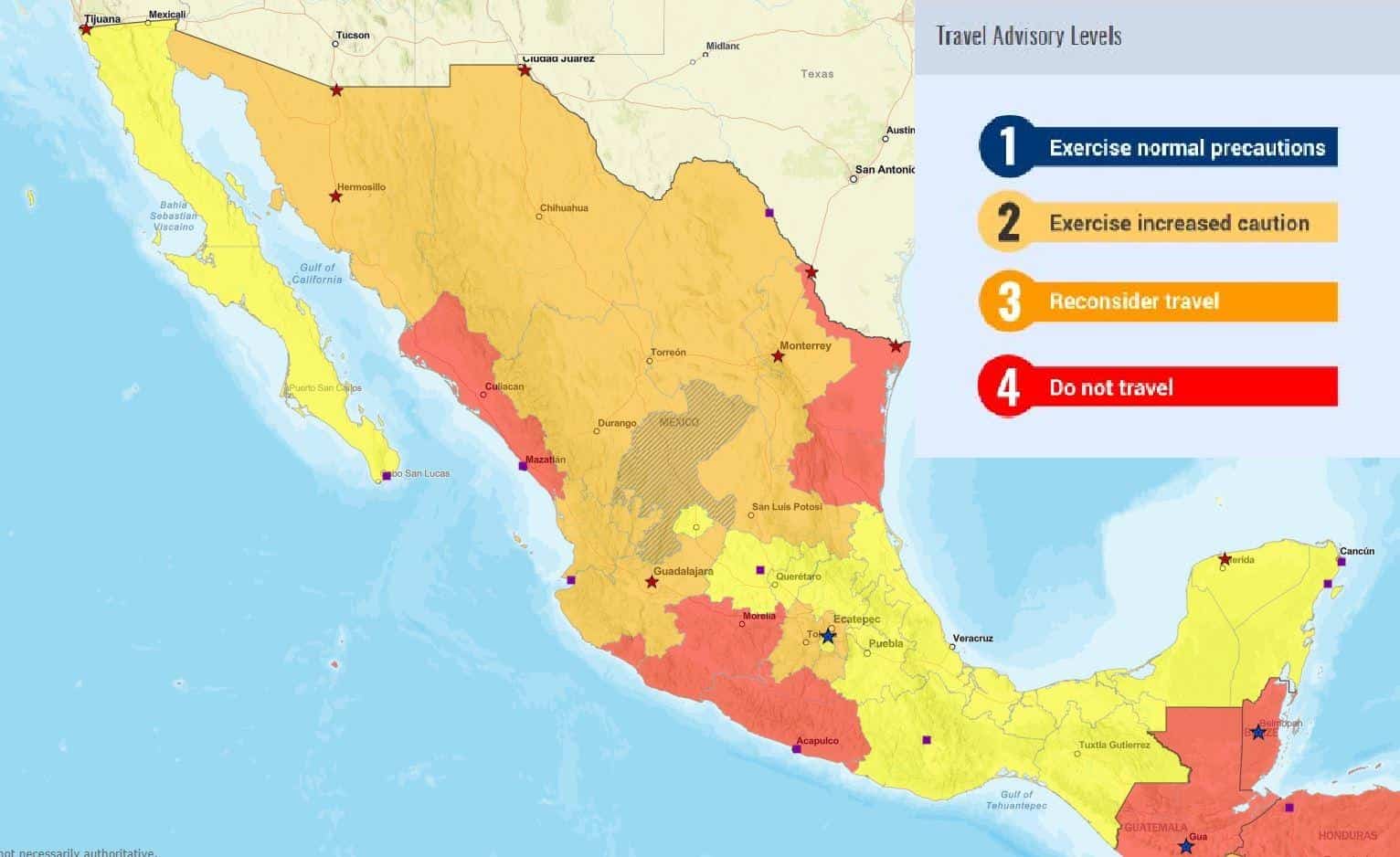 I suggested the Best Beaches to Visit in Mexico for 2020 that are in the light yellow areas of Mexico.

Just make sure to check the map and the travel advisories before making any travel plans. Things can change from day-to-day. Okay, here are the Mexican Highlands in the light yellow on the day this report was posted.

Many think of Mexico as a beautiful beach hangout to hide from the cold during the winter months. But Mexico also has a number of cities a mile or more in the sky that are charming cooler places to explore the colonial-era cultural richness of Mexico. So which of these highland cities are in the light yellow zone of Mexico?

Best Mexican Highlands to Visit for 2021

San Miguel De Allende (elevation: 1900 meters, 6200 feet): San Miguel is one of the most beautiful and famous colonial-era cities in the world. It has been ranked as the second-best city in the world by Travel and Leisure Magazine in 2020. It was one of the first cities in Mexico that attracted Americans to Mexico when the Bellas Artes school attracted Americans post World War II resulting in San Miguel becoming an artists’ mecca. Many artists stayed and many others returned when they retired. Qiang and I walked these beautiful colonial-era streets for hours discovering new art galleries, coffee shops, parks, and delicious restaurants. There are roughly 25,000 foreigners living in San Miguel, about half of them are American. In 2013, Conde Nast Magazine designated San Miguel as one of the best places in the world to visit. You just absolutely have to see San Miguel before you go to your grave. Make sure to take my walking tour when you are there.

Queretaro (elevation: 1820 meters, 5971 feet): In addition to having one of the most charming colonial-era centers, Queretaro is also the silicon valley of Mexico. Queretaro also has the second-highest income per capita in Mexico ($20k USD) and is second highest in wine production. Because of the high incomes and well-kept colonial-era center, many people believe Queretaro has the best quality of life and is the safest city in Mexico. Make sure to enjoy my night-life walking tour when you are in Queretaro.

Guanajuato (elevation: 2012 meters, 6600 feet): The Valenciana silver mine in Guanajuato produced two-thirds of the world’s silver for 200 years. While the silver flowed, it was the richest city in New Spain. Because of the city’s colonial-era wealth, much of the best colonial architecture in Mexico is here. Many of the streets are so skinny or steep, automobiles can’t drive down them. Many streets are underground so the surface feels like a small European Village. The International Cervantino Festival is held here annually in October. The Queen of England even visited here during the festival and the Beatles performed here in the 1970s. The University of Guanajuato can trace its root all the way back to 1732 and more than 33,000 students are enrolled in the campuses spread all over the state of Guanajuato. Make sure to enjoy my old town walking tour while you are here.

If you are finding any value in this video, could you please like, comment, share, or subscribe? That would move us up in the search rankings and grow our channel. Thank you so much.

Mexico City (elevation: 2250 meters, 7280 feet): I grew up in America and somehow thought Mexico City must be a large disgusting impersonal place with people living on the streets in dangerous poverty. How surprised I was to see how beautiful and interesting it was when I visited there in 2018. Make sure to take my walking tour of old town Mexico city. Make sure to also take my walking tour of my favorite neighborhoods in Mexico City called La Condesa and Roma Norte. You should also see the Polanco neighborhood, the Anthropology Museum and the Mexican Castle.

If you are thinking of touring Mexico, the first four Mexican Highland Cities I mention can be grouped nicely. I have a report that teaches Touring Mexico.

Puebla (elevation: 2135 meters, feet 7105) Puebla was built in 1531 between two indigenous cities after a Spanish Bishop had a dream about angels. In the dream, angels descended from heaven and traced out a city. He went searching and found the meadow 25 kilometers (16 miles) from his monastery. He wrote to the Queen of Spain and received approval to build Puebla de Los Angeles (City of Angels). Puebla was classified as a UNESCO World Heritage site in 1987 because of its colonial-era architecture and history. The historic center contains 2619 monuments distributed across 391 blocks. That makes Puebla the largest classified World Heritage site in all of the Americas. Puebla is a highly respected intellectual mecca with six prestigious Universities. Make sure to take my old town walking tour when you are in Puebla.

Oaxaca (elevation: 1555 meters, 5102 feet): We visited about 20 cities in Mexico in 2018 and Oaxaca was our favorite overall. It seemed to have a more relaxed in-tune with nature feeling to it. Maybe because it is the home of the largest concentration of indigenous people in all of Mexico. Everywhere you turned there were colorful indigenous arts and clothing and foods to try out. There seemed to be a real pride in the local origins of the clothing, foods, and crafts. That makes sense because Oaxaca is where the indigenous people of Mexico gather once a year for the largest cultural festival in the world. Oaxaca is also home to some of the most preserved archeological sites in Mexico such as nearby Mitla and Monte Alban. Make sure to take my cheap tours of these archeological sites and my old town walking tour. Make sure to take my old town walking tour while you are in Oaxaca.

San Cristobal (elevation: 2200 meters, 7218 feet): Unlike many other cities in Mexico, the Spanish built this city from the ground up. They did not destroy an old city that was here before they arrived. San Cristobal is a favored tourist destination because it maintains its colonial charms of red tile roofs, cobblestone streets, flowered wrought-iron balconies, and the indigenous population with their cultural beauties. Arts and crafts are a big deal here. In the evenings you see not only local indigenous people but also foreign hippie-ish people selling their handmade jewelry, arts, and crafts. This is a hippies heaven. If you have liberal social beliefs and consider yourself a bit of a hippie, this place will feel like home. Everyone sings, plays instruments, and dresses creatively. It is a lovely place. The foreign influence on daily life is as strong here as I have seen anywhere in Mexico. Like most of the cities I have reported on around the world, make sure to take my walking tour of old town San Cristobal.

Detailed Retire Cheap in Paradise Reports are available for each of these Mexican Highlands cities at VagabondBuddha.com. Thanks for reviewing my report on the Best Mexican Highlands to Visit for 2021. Make sure to grab a free copy of my eBook How I Fired My Boss and Traveled the World for 13 Years.

My goal is to make this channel better every day. But I need your help. Please leave your new topic ideas, criticism, and other thoughts in the comments below this video.

This is Dan from Vagabond Awake, the Youtuber Channel for VagabondBuddha.com. The world is your home. What time will you be home for dinner?